In my last article we set up the supporting services we would require for our Laravel app once we deploy it to the Elastic Beanstalk architecture. We created a VPC to keep our infrastructure secure, we created a MySQL database in RDS, and we set up ElastiCache for our Redis cache. So now that our Laravel app is decoupled and our supporting services are in place, it’s finally time to deploy our app to Elastic Beanstalk.

As with all AWS services there are multiple ways to interact with the service depending on what you are doing. I’m a visual person so I tend to use a GUI when I can, however in this article we will be using the Elastic Beanstalk Command Line Interface (EB CLI) so you should go ahead and install the EB CLI if you don’t already have it installed.

The first thing to know about Elastic Beanstalk is that each application can have multiple environments. There are two types of EB environments: a web environment (default) for serving web pages and a worker environment for running cron and queue jobs.

Let’s get started by creating the application and our initial environment in Elastic Beanstalk. As I said above we’re going to use the EB CLI for this part. In the root of your Laravel app run:

Select the region you want to deploy EB in. If you are asked for your AWS credentials at this point make sure you have an IAM user set up with the correct permissions (AWSElasticBeanstalkFullAccess). Continue to follow the instructions answering the questions based on your preferences. 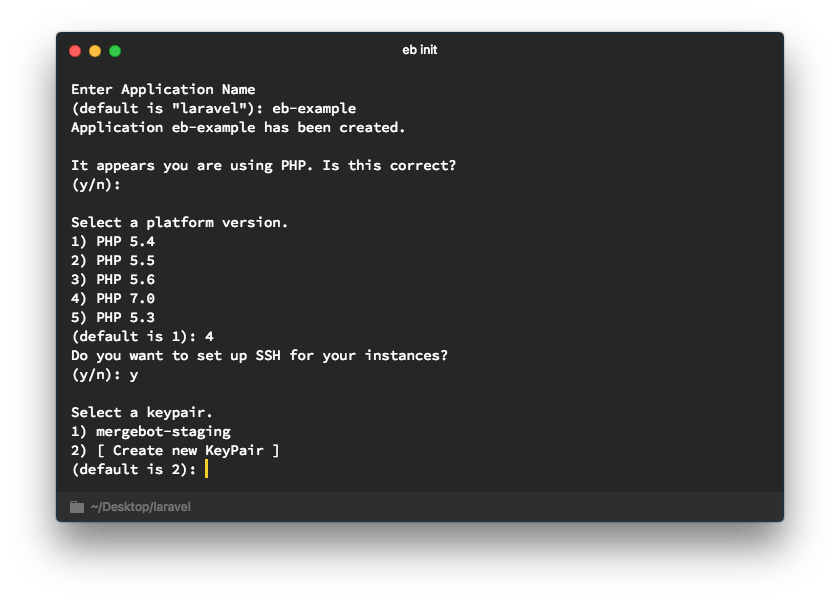 It’s worth noting at this point that you should see a new .elasticbeanstalk directory in your app folder. The EB CLI uses this directory to store some config values but it should not be added to your project’s Git repository. The EB CLI should add the following lines to your .gitignore for you:

.ebextensions is simply a directory you create in your app that contains some YAML configuration files that sets options or runs commands in your EB environment. The .ebextensions docs give you an idea of what these config files can be used for, suffice to say they can be used do almost anything from setting environment variables to creating files and installing packages.

One thing that isn’t overly clear from the docs is that almost everything in .ebextensions is executed in alphabetical order so it’s common practice to prefix config files and commands with an integer to specify the order it should be run in. Let’s get started by creating a config file to hold our environment variables in .ebextensions/01-environment.config:

The DB_HOST and REDIS_HOST values I’ve used from the services we created in the last article. Fill in the rest of the values in {} with your own values. The AWS key/secret can be from the IAM user we created earlier (make sure and give the IAM user permissions for S3 and SQS to work properly). We don’t currently have the details for the AWS_SQS_PREFIX and the AWS_SQS_QUEUE as the queue will be created for us automatically when we create our worker environment, so we can leave these for just now and fill them in later.

Next we need to create a .ebextensions/02-deploy.config to specify some commands we need to run during deployment:

First we specify some container_commands to run once our files have been deployed (note this is different from normal commands that get run before our files have been deployed). We don’t need to run composer install as EB installs composer dependencies automatically for us. Note here that we’re prefixing commands with an integer 01- to control the order in which they are run as commands are run in alphabetical order.

Next we are creating a file that is a simple bash script and will be executed as an EB deployment hook. Sadly there isn’t really any proper docs for EB deployment hooks but this article explains them pretty well. Basically we’re telling EB to create a file with the given content to be run after the app has been deployed. The script itself creates the storage/logs/laravel.log file, sets the correct permissions and also symlinks the public/storage directory.

Next we’re creating a config file that enables our Laravel logs to be rotated and published to S3. This can be handy when debugging issues later and also stops your server space filling up with logs.

Finally we’re creating an Apache config file to redirect any non-HTTPS traffic to HTTPS based on the X-Forwarded-Proto header. If you remember from my first article we configured Laravel to use these headers as EB is going to be setting up a load balancer for us. If you’re following along with this tutorial and not planning on adding a custom domain with HTTPS (more on that later) then you can remove this section from the config.

Once we have our .ebextensions config files in place it’s time to actually create our environments. Back in the EB CLI run the following command:

Again follow the instructions selecting the relevant options. For our purposes a classic load balancer is fine. 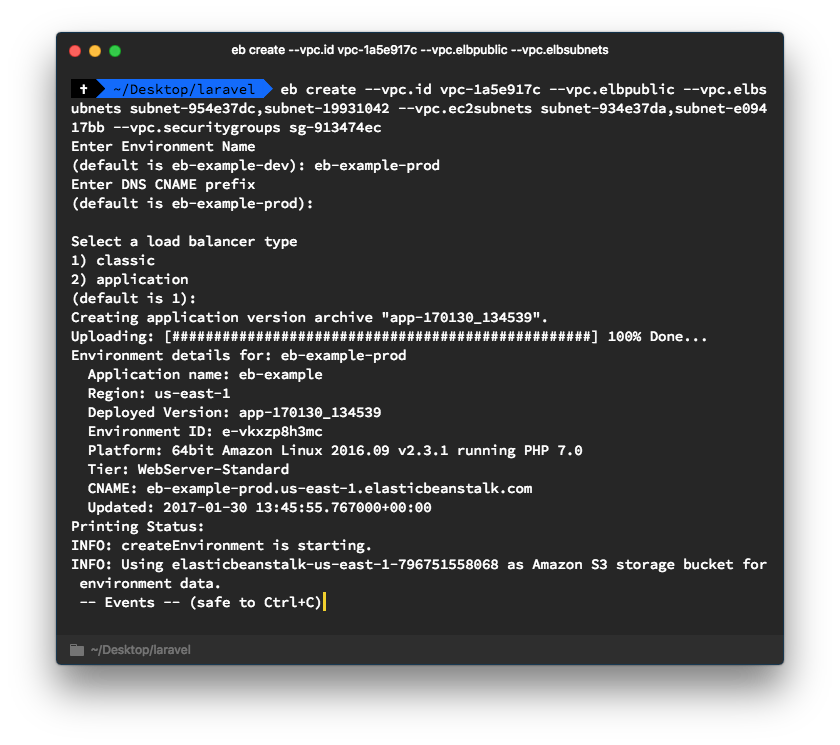 Once complete, the EB CLI will package up our application and send it to Elastic Beanstalk. The CLI will output event info as the deployment progresses. You can also head over to the console to monitor the progress. If anything goes wrong with the deployment you will be notified in the events and you may have to tweak some settings and run eb deploy again until you get it up and running.

Next we want to run the same command again but this time we want to specify -t worker to set up our worker environment. The environment should be identical apart from the name obviously: 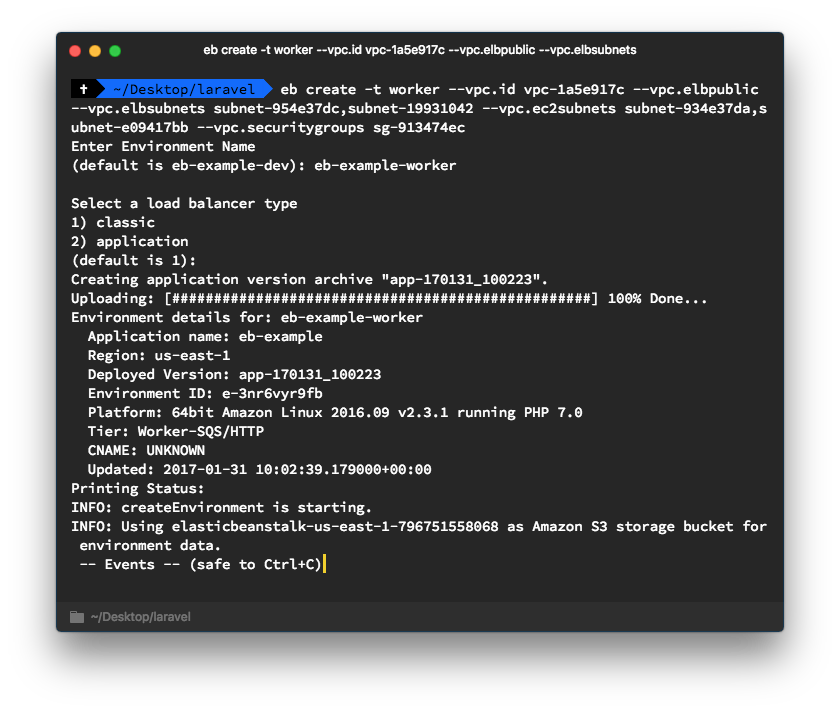 All being well, both environments should be green in the EB console and if you visit the web environment URL you should see your Laravel site.

At this point I find it helpful to go into each environment using the EB console and make any changes you feel are relevant. For example, you can set up when the auto scaling is triggered, change the size of your EC2 instances, enable health checking, enable HTTPS, etc. One change I recommend making manually is changing the APP_ENV environment variable in the worker environment to distinguish it from the web environment APP_ENV. This way you can check the app environment in your code if you want something to only run on the worker servers.

Another thing we need to do at this point is go back to our .ebextensions/01-environment.config and fill in the AWS_SQS_PREFIX and AWS_SQS_QUEUE values that we left earlier. You can find these values by going to the worker environment in the EB console and clicking “View Queue” beside the environment name. Once you have updated your config file run eb deploy to deploy the update.

To get HTTPS working on the load balancer, first you need to generate a certificate using the AWS Certificate Manager. I’m not going to go through the steps of generating a certificate here but again it’s pretty straightforward.

Once your certificate has been generated, head back to your web environment in Elastic Beanstalk and under Configuration > Load Balancing update the settings to set the “Secure listener port” to 443 and select your new certificate as the “SSL certificate ID”.

Hopefully at this point you should now have a Laravel app running on Elastic Beanstalk with queue jobs in SQS, a MySQL database in RDS and a Redis cache in ElastiCache. Feel free to start tweaking the setup and config files to meet your needs. There is also plenty of information in the Elastic Beanstalk docs on potential next steps such as monitoring your environment and integrating with other AWS services.