Back in September, the team gathered in San Diego, California for our company retreat to attend WordCamp US 2022. As a bronze level sponsor, our goal was to raise awareness of the new features and improvements to SpinupWP as well as catch up with existing customers to get their input on the latest product enhancements.

With the pandemic putting in-person WordCamps to a halt in 2020, needless to say, we were excited to get together again as a team to interact with our customers and fellow WordPress developers.

A lot has changed around the world since SpinupWP last sponsored WordCamp US. In 2019, our team gathered in St. Louis, Missouri as it was our first time sponsoring the event. This time around, we hit the pacific coast of Southern California.

This was my (Sam) first company retreat since joining the team last March and was excited to meet everyone in person. Immediately after we touched down in San Diego, we took a long walk down Mission Beach and Pacific Beach to catch up and grab some drinks.

From surfing the beautiful waves of the beach to meeting talented WordPress devs from across the world. The memories I created on this trip will last forever.

We also get to know each other much better on company retreats, which in turn makes it even easier for us to work seamlessly together and provide a much better product experience for our new and existing customers.

Brad did all of the planning. He booked the accommodations and made the schedule.

He continuously updated our schedule in a Notion doc so that the team’s expectations were always clear. With San Diego being less than a 30-minute drive from the Mexico-USA border, the majority of our meals consisted of authentic Mexican food. Most with gluten free and vegan options. Delicious!

Here was the plan for our 5-day retreat:

We followed the schedule for the most part, although we weren’t able to attend some of the WordCamp after parties due to sheer exhaustion. For most of us, jet lag put us to bed by 9pm most nights.

We were able to balance work, activities and downtime. It was great to get to know the team personally before the conference started on Friday. It made it much easier to approach them on the conference floor when I needed an answer to a question that was beyond my knowledge.

We ended up renting two apartments right next to each other in Mission Beach. With six of us being there, half of us stayed in one unit while the other half stayed in the other. The names of the apartments were Brighton Oasis and Mission Sands. 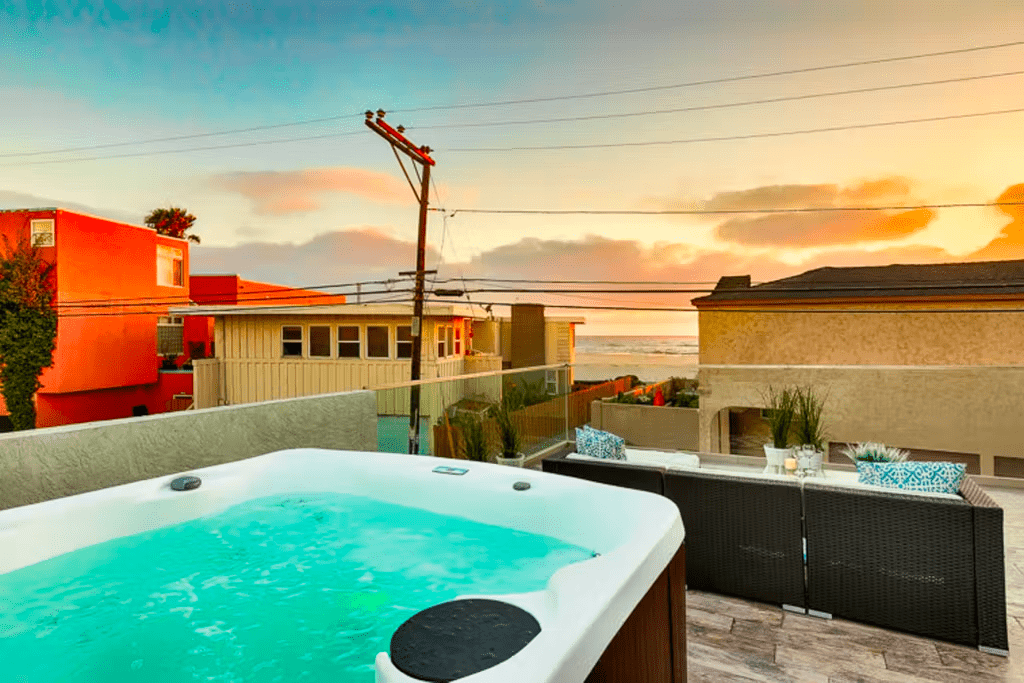 Within walking distance from both places was Sara’s Mexican Food, Cannonball Sushi (best sushi I’ve ever had), surf lessons from Pacific Surf School, and Mission Market for multiple grocery runs.

As far as where we worked, ate breakfast, and enjoyed leisure time, those all took place at Brighton Oasis. Out of the two apartments, Brighton had air conditioning, which was much needed due to the major heatwave southern California was experiencing (you know it’s bad when the state sends emergency messages to your phone). However with that being said, we really lucked out with the weather. On days where we could be outside eating at restaurants and surfing, the weather was sunny. On days where we were inside all day for the event, the weather was raining/overcast. Perfect timing!

Just to give you an idea, here’s how close the apartments were together.

Our main goal of sponsoring WCUS 2022 was to raise awareness of the new features and improvements to the product as well as catch up with existing customers to get their input on the latest enhancements.

The day before the event (Thursday Sept. 8th), we set up our booth at the Town and Country Resort with SpinupWP merchandise (t-shirts, hats, and stickers) for our customers attending WCUS, and a small banner unveiling our future branding.

If you attended WordCamp US this year, then you probably saw us kickin’ around at some point wearing our vintage black t-shirts and hats.

The thing I enjoyed the most from sponsoring the conference floor were the conversations we had with the event attendees. We had a mix of people who praised the product with insightful feature requests to enhance it, as well as people who had never heard of us before who thought they’d give us a try by signing up for a free trial.

For those unaware, SpinupWP was a Delicious Brains product until Delicious Brains was sold to WP Engine in June 2022. This sparked many positive conversations between Brad and the event attendees. He gave them insights into how we plan on continuing to bridge the gap between DIY and managed WordPress hosting.

The personal highlight for me was bonding with the team over surfing on Mission Beach. The waves on Pacific Beach that day were the perfect size for n00bs like us to learn the basics.

We took a group surf lesson with an instructor. It was great because most of us were beginners, and had never surfed before that day.

Another big highlight was the food. If we’re talking culinary attractions, Mexican food is San Diego’s main card. And with Mexico being a stone’s throw away, the authenticity was spot on!

The upscale sushi we had at Cannonball was delicious as well. Unfortunately, none of us were able to capture any shots of the roll’s presentation, but here’s the view we were working with while we ate. Not bad!

Another great thing about San Diego is how easy it was for the entire team to get around the city with Uber, and how little traffic there was compared to nearby cities like Los Angeles and San Francisco. With San Diego being a major US city (8th most populated city in the country at 1.5 million people), I was surprised at how little congestion there was.

Our company retreat to San Diego this year was awesome. For a few of us, it was our first time attending WordCamp US. For others, it must have felt great to get back to the WordPress ecosystem in-person after taking a few years off due to the pandemic.

It was particularly nice to finally meet everyone on the team and learn their stories. I loved how friendly, focused and enthusiastic everyone was.

As per attending WordCamps in the future, we discussed the possibility that the next company retreat could be WordCamp Europe 2023 in Athens, Greece. The last time we had a company retreat in Europe was in 2019 in Berlin, Germany, while we were still under the Delicious Brains banner.

Will you be attending WCEU next year? Did your company go on a retreat this year? Where did you go?

Sam is a marketing manager based in Kentville, Nova Scotia. His background includes social media marketing, email marketing, and WordPress design. He takes great passion in being a creative problem solver, and is always looking to expand his skillset.