What Does Ubuntu “LTS” Mean?

One of the minor inconveniences in owning and managing your own web servers is knowing which operating system to use. There are a wide variety of open-source Linux distributions (or distros) available for your web server. SpinupWP recommends using either Ubuntu 18.04 or Ubuntu 20.04, which are both LTS releases. If you do a bit of research on the different release versions, you might wonder why we recommend the LTS release.

In this article, we’ll dive into why we recommend Ubuntu LTS, what an Ubuntu LTS release means, the benefits of using the LTS release, whether you need to keep updating every time an LTS version is released, and how best to manage upgrades when they are needed.

With over 40% of web server operating systems running some known version of Linux, it’s essential to choose one for your production servers that is stable, secure, and well supported. Between them, Ubuntu and Debian (Debian being the Linux distro Ubuntu is based on) account for two thirds of all Linux web servers, with Ubuntu powering almost 50% of them. 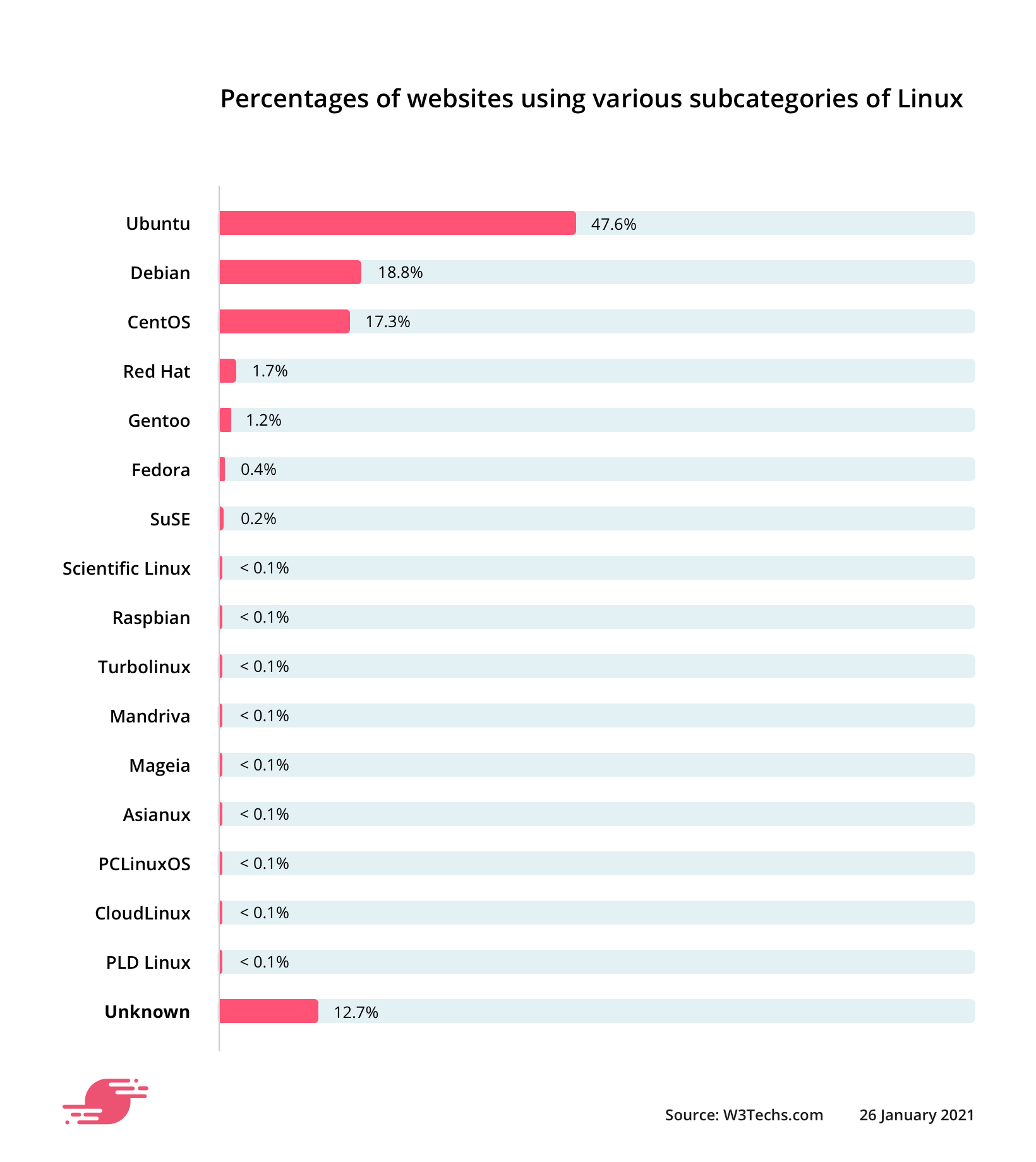 At SpinupWP, we chose Ubuntu for a few reasons:

What does Ubuntu LTS mean?

In 2004 Mark Shuttleworth founded Canonical with the goal of creating Ubuntu. Ubuntu was the first Linux operating system to commit to predictable, scheduled releases. In 2006 Canonical decided that they would introduce the Long Term Support release.

New versions of Ubuntu are released every six months, in April and October. The Ubuntu releases have version numbers that are based on the release date. They use the last two digits of the year and the two digits of the month. So as an example, release 18.04 was released in April of 2018.

Every two years, in April, the LTS version is released. LTS releases are considered the ‘enterprise-grade’ releases. They are typically used for production servers that need security and reliability, like web hosts. The last LTS release was in 2020, Ubuntu 20.04. The other release in 2020, Ubuntu 20.10, would have been called an interim release.

So in any given two year period, there is one LTS release and three interim releases.

What are the benefits of the LTS release?

Ubuntu is one of the few Linux operating systems that offer LTS releases. LTS releases are supported and maintained with security updates and bug fixes for five years after the initial release. Due to this, LTS releases are always the most stable and secure.

One of the reasons for the three interim releases for every LTS release is upgrades to existing software. By including newer versions of software in the interim releases, software updates can be tested to ensure they will not break. This testing process allows LTS releases to safely include any software updates that might come out in the two-year cycle. It also means that sometimes a piece of software available to an LTS release might not be the most recent. The thinking is that a more stable piece of software is better than a newer one.

By offering an LTS version, Ubuntu allows its users to stick to one release every five years. This is especially important to those who need a stable, secure operating system for their businesses. It also means not needing to worry about changes to the underlying infrastructure which could affect server uptime.

Should I always be on the latest LTS release?

The Ubuntu LTS five-year support schedule is aimed at users requiring stability. It allows them the comfort of using the same release for at least five years. It also means there’s no need to upgrade every two years when a new LTS comes out.

Any future security improvements or bug fixes are made available to the current LTS releases. SpinupWP configures your server to apply these updates automatically. With automated updates, they are already installed to your server as soon as they become available.

One possible reason you might want to consider upgrading to a newer release within the five-year window would be the server software. To ensure your websites are operating optimally, you’ll want to keep your PHP, Nginx, or MySQL software up to date with the latest versions available.

You might think that installing a newer version of Ubuntu means that you can install the latest third-party software packages, but this is not the case. The Ubuntu software repositories include software packages that have been thoroughly tested and built specifically for a specific Ubuntu release, at the time of that release.

For example, both Ubuntu 20.04, the LTS release, and Ubuntu 20.10, the interim release just after it, have PHP 7.4 available to install. At the time of both releases, PHP 7.4 was the latest, stable version of PHP. However, the most recent, stable version of PHP, PHP 8.0, was shipped just over a month after Ubuntu 20.10 was released. If you want PHP 8.0 on your Ubuntu server, you would not be able to install it on any current version of Ubuntu, using the default software repositories.

Fortunately, if you’re using SpinupWP’s control panel, these things are also already handled for you. We follow our own advice and SpinupWP will install, and keep up to date, the latest stable versions of Nginx, PHP, MySQL/MariaDB, and Redis from these trusted third-party PPAs.

Should I consider upgrading to a non-LTS release?

For all of the above reasons not to upgrade your LTS release every two years, you should also not upgrade to any interim releases. The interim releases may contain software that’s still being proven, and it may affect your server negatively. For servers that require a high level of stability, the interim releases are not recommended.

My current LTS version is nearing end-of-life. How do I upgrade?

The last LTS released in the past five years was in 2016. If you have a server running on the 16.04 LTS release, its end-of-life (EOL) date will be in April 2021. At that point, or very close to it, you should consider upgrading to the newest LTS release, which would be 20.04.

If you are someone who regularly logs into your server via SSH, you may see a message like this one. It indicates that a newer LTS release is available. 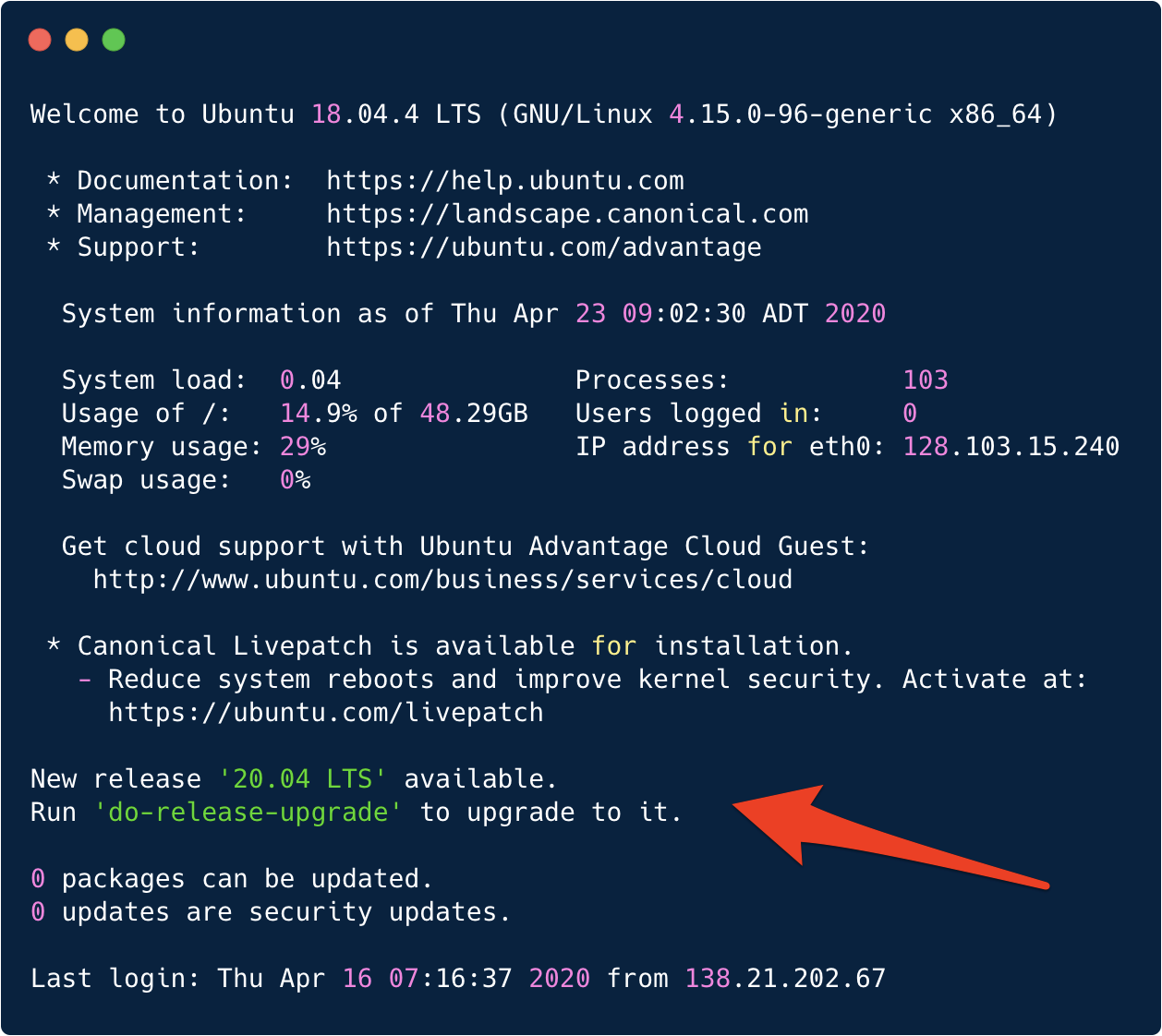 SpinupWP also keeps an eye on this. When a new LTS version comes out, we let you know what the EOL date for the previous version was. All you then need to do is check your current LTS version.

As you will see from our support doc on upgrading, we don’t recommend using the built-in upgrade tool. There are a few reasons for this:

The Ubuntu LTS upgrade path has improved much over the last five years. Some might consider it safe to run the upgrade from the command line, but it’s not recommended. If something went wrong in the process, it would be hard to recover from without the necessary server admin knowledge.

Instead, we suggest starting fresh with a new server, installing the latest LTS release. Then you can migrate your sites over from the old server. SpinupWP’s Site Cloning feature makes this step painless. You can safely and easily move every site over to the new server with minimal downtime. Once this process is complete, you can retire the old server.

You can trust Ubuntu LTS.

The LTS releases of Ubuntu are your best bet for a stable, secure server environment for five years. With so many other things to worry about, the last thing you need is concern over your web servers. By recommending the LTS releases, we want to help you choose the safe, secure option.