So you’ve followed our in-depth guide and built yourself a shiny new server that’s secure and tuned for optimal WordPress performance, but what’s next?

In this chapter I’m going to outline a few tasks that should be carried out on a regular basis to ensure that your server continues to run securely and perform well. We’ll look at performing software updates, upgrading PHP, and a few “gotchas” to watch out for that we may have experienced ourselves.

As I’m using Digital Ocean, monitoring server performance is a relatively simple process thanks to the built-in monitoring tools. For those not hosting with Digital Ocean, Netdata is a great alternative or Pingdom Server Monitoring if you’d prefer not to host it yourself.

If you enabled monitoring during the Droplet creation, then you’re good to go! Otherwise, you’ll need to install DigitalOcean’s metrics agent manually.

Once installed, you should see the Droplet’s current resource utilization when visiting the Droplet dashboard. 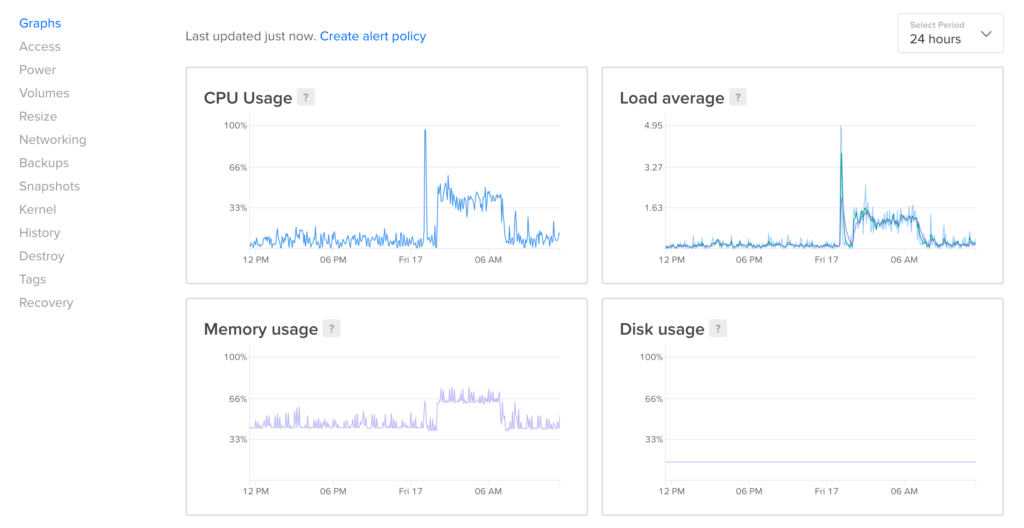 Alert policies are extremely useful, and you should configure them for all Droplets. Alerts reduce the need to manually check your server’s health by sending a notification when one of your chosen metrics reaches a certain threshold. 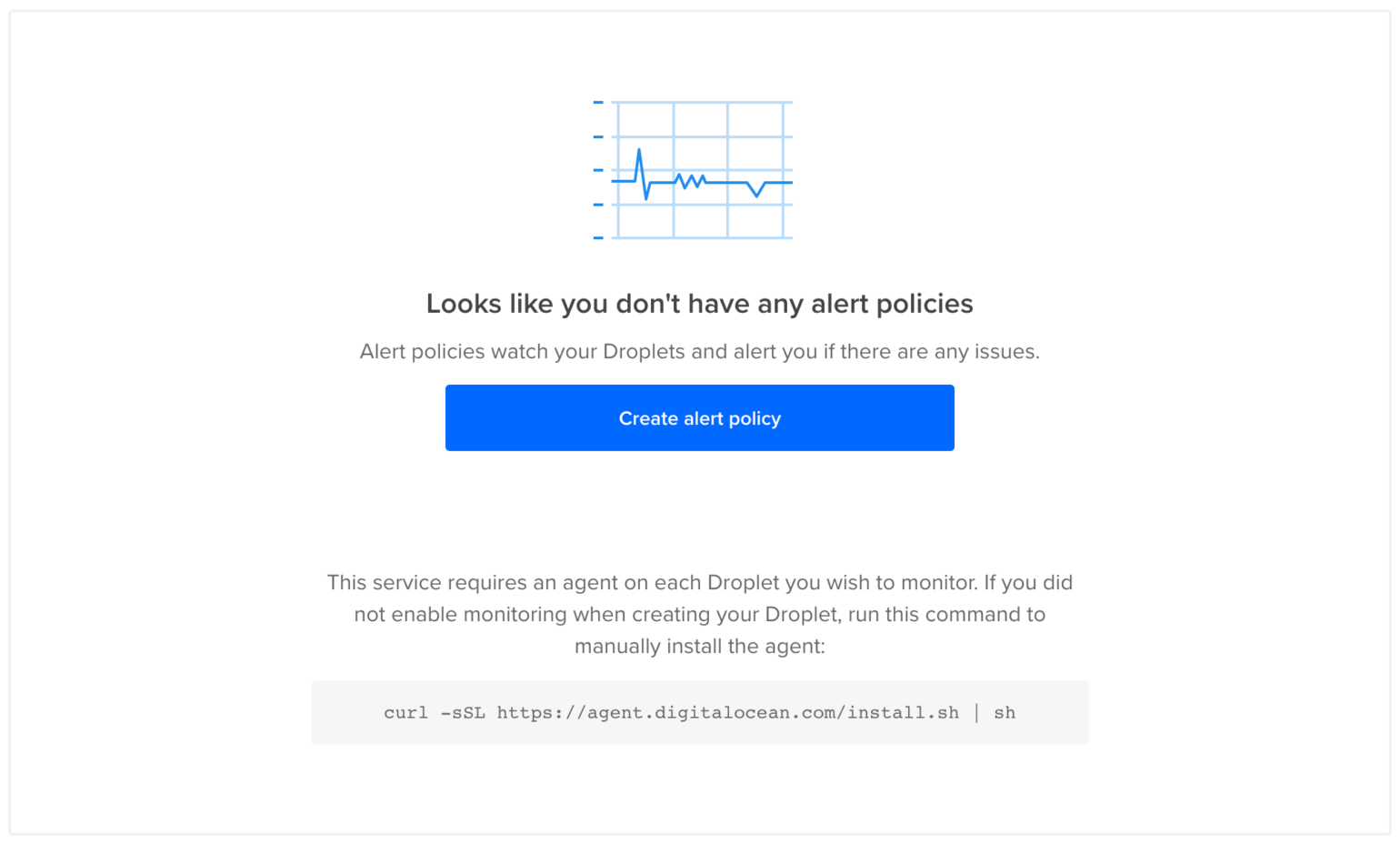 Here you can create as many alert policies as required. I like to set up alerts for CPU, memory and disk utilization with a threshold of 80%, which is a good starting point for most people. 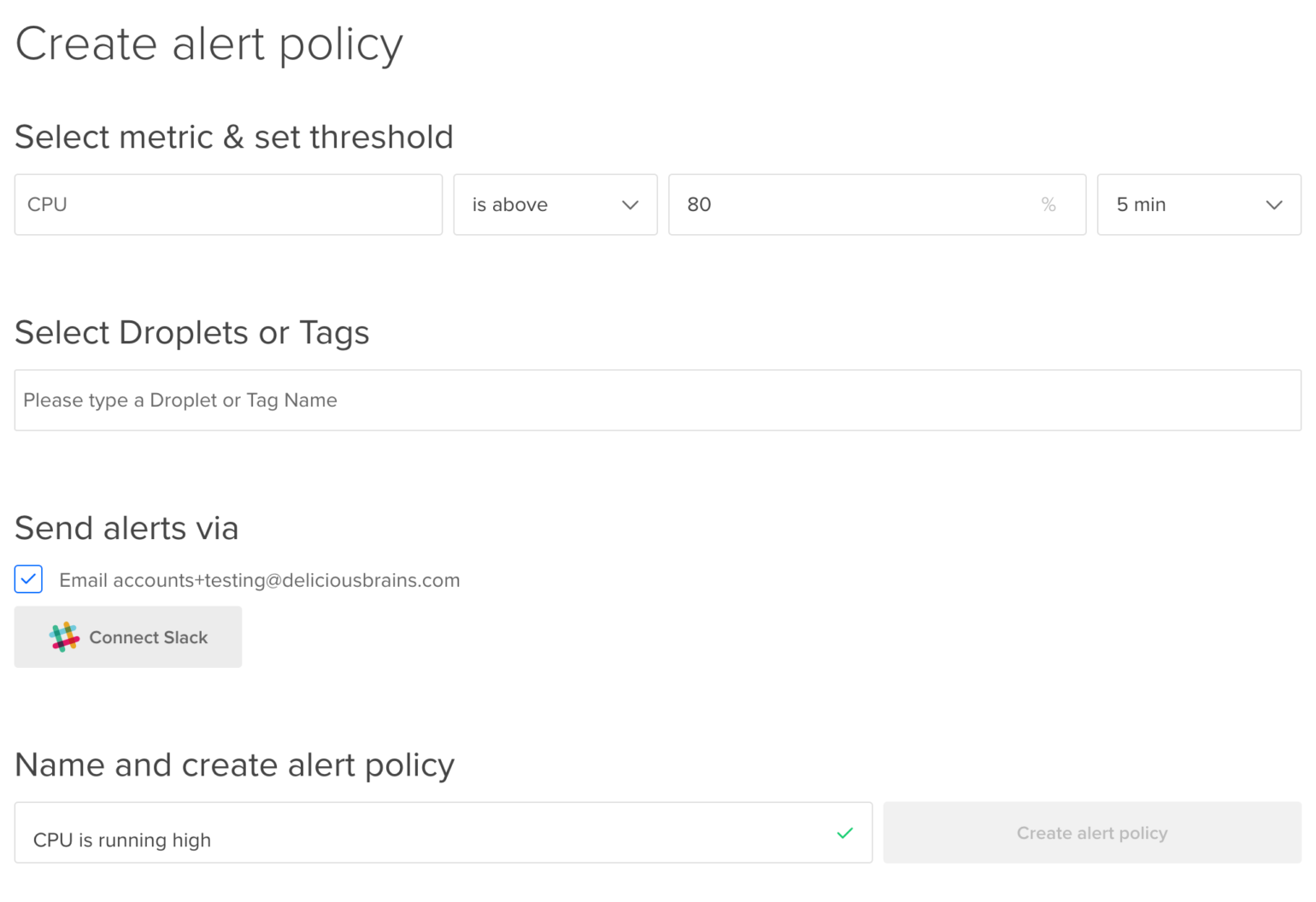 A high resource usage alert can be the first sign that something is wrong with your server or the applications that it’s running. To investigate, SSH into your server:

Run htop to have a look at the system resource usage in real-time: 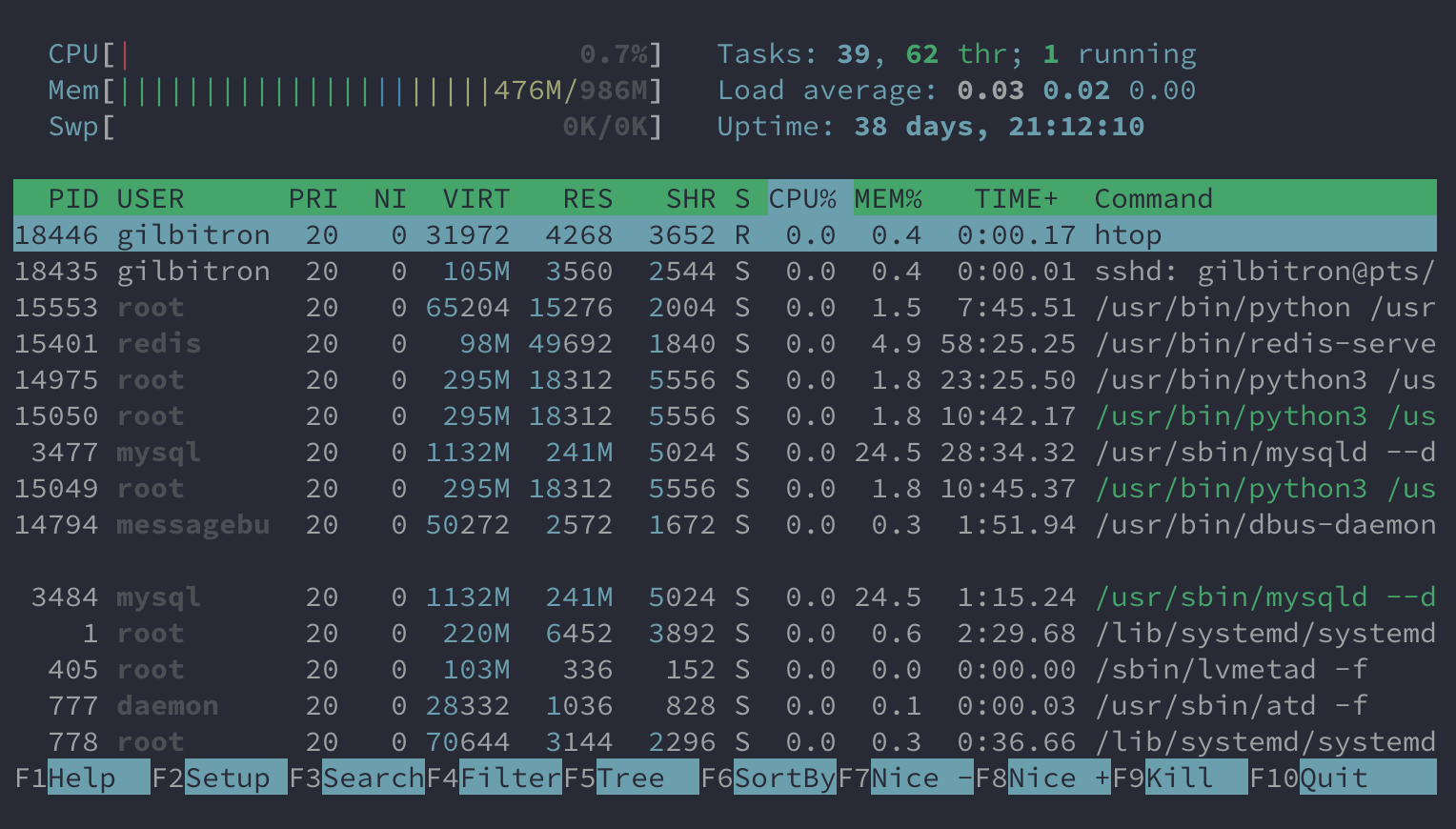 If it’s Nginx or PHP appearing at the top of the list, you should have a look at your access and error logs. If it’s MySQL, you’ll need to enable the slow query log. A much easier way to diagnose issues is to use an application monitoring tool like New Relic.

Recently, we were receiving high CPU alerts from our VPS provider. After performing some application monitoring using New Relic, we discovered that a database query was running slow, which was causing MySQL to spike CPU usage. It turns out we were missing an index on one of our database tables. Adding the index resulted in a big drop in CPU usage:

If the alert is for high disk utilization, you’ll need to check your disk space usage to find out which files are taking up a lot of space on your server.

That’s all there is to server monitoring, now onto maintaining your server!

Let’s start with an easy one that isn’t just applicable to self-hosted WordPress installs. WordPress itself, WordPress themes, and all plugins should be regularly updated. No software is immune to vulnerabilities and updating often will ensure those inevitable vulnerabilities are patched.

While you’re at it, make sure you delete obsolete themes and plugins. There’s no reason to keep them around, other than to provide a potential entry point for malicious users. The majority of premium plugins and themes won’t receive updates via the WordPress dashboard if they’re deactivated. For that reason, it’s better to delete them than leave them lying around.

It’s inevitable that things go wrong, sometimes horribly. Regular site backups are an integral part of any disaster recovery process. In chapter 5, I demonstrated how to set them up. However, you need to ensure that they are running as expected months down the line.

Earlier this year, we noticed that our site backups hadn’t made it to S3 for almost two months. The cause? Our backup script had stopped working due to a Python dependency issue. The moral of the story? Schedule a recurring time to verify that backups are being carried out. You should also periodically test the backups by importing the SQL into a test database to ensure they’re usable if things were to go wrong.

Just like server monitoring, log files can help to identify issues early on before they become catastrophic. Every once in a while it’s worth checking the logs to see if anything unusual is happening. I would concentrate on the following:

We use Papertrail to make it easier to monitor those log files (especially debug.log, which we have permanently enabled). What makes Papertrail ideal is that you can easily send certain logs to Slack. We have an alert configured for any fatal errors that occur.

However, the log files themselves can become problematic if left unchecked. One downside to most VPS providers is that they provide very little disk space, which means the logs can quickly fill the server’s storage.

In the past, I’ve had a server completely fall over because a log file grew to over 25 GBs in size. If I’d have configured server monitoring and periodically checked the logs, this wouldn’t have been a problem. It’s also worth enabling log rotation for log files in custom locations such as debug.log.

If you followed along with this guide, you would have configured automatic security updates using unattended-upgrades, which will apply security updates on a daily basis. However, it won’t install general software updates that contain new features and bug fixes. If you SSH to your server you’ll often be presented with the following: 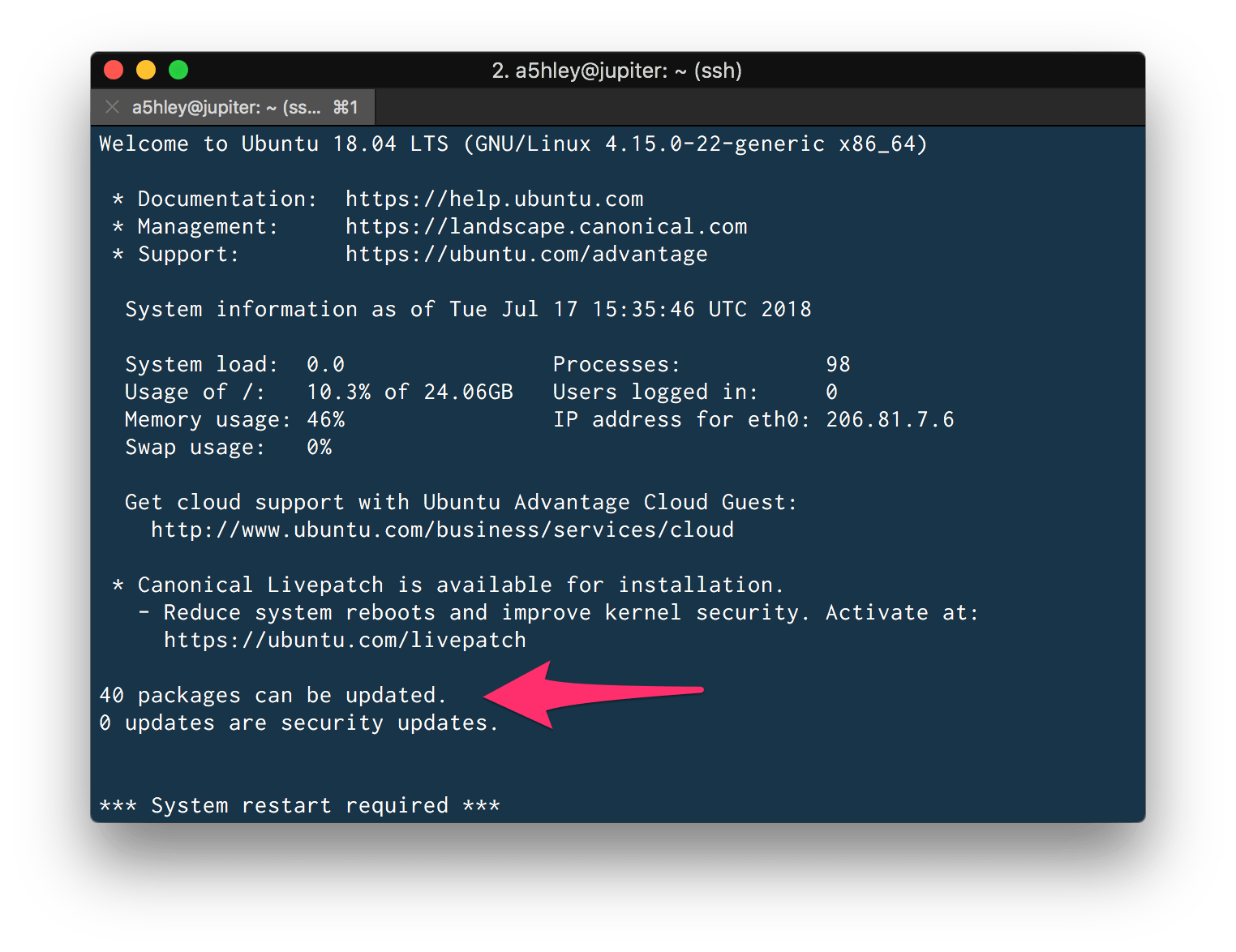 Those packages won’t automatically get updated because they don’t contain security fixes. To update them, run:

I recommend using apt dist-upgrade vs. apt upgrade because it will intelligently handle dependencies.

Before performing any upgrades, you should create a full system backup via your VPS provider (sometimes called snapshots).

If you are using the ppa:ondrej/php repository, you can safely install multiple major versions of PHP side-by-side, which we can use to our advantage. Remember that you only need to follow these steps if your server isn’t already running PHP 7.4, otherwise just run apt dist-upgrade.

Next, you should configure the new version of PHP as demonstrated in chapter 2. Remember to also copy any modifications from your existing php.ini file, found at /etc/php/{PHP VERSION}/fpm/php.ini.

At this point, you’ll have multiple PHP versions installed, but Nginx will still pass requests to the older version. Next, update your site’s Nginx config so that the fastcgi_pass directive passes requests to PHP 7.4.

Test that your config changes are correct, then restart Nginx.

To ensure that the site is now running on PHP 7.4 visit the Site Health under Tools in your WordPress dashboard. Once confirmed, repeat the changes for each site on the server. Ideally, you’ll perform these changes on a staging site and test the critical paths before updating any production sites.

Once you’re happy that everything is working as expected you can remove the old version, like so:

What About Updating Ubuntu? {#what-about-updating-ubuntu}

Ubuntu releases a new LTS version every two years, the most recent of which being 20.04 (Focal Fossa).

So should you update to a new LTS version as they’re released?

It’s a question often debated, and you’ll get different recommendations depending on who you ask. Personally, I don’t ever upgrade a server’s operating system (OS).

An OS upgrade can be a slow process to complete (think about the last time you updated your computer to a new major release of macOS, Windows, or Linux). During this time your sites will be completely inaccessible.

There’s also a good chance that some existing server packages won’t be compatible with your new OS version, which can further increase the downtime as you scamper to rectify such issues.

A much safer approach is to spin up a fresh server. Doing so allows you to test that everything is fully working as expected. A clean slate is also an excellent opportunity to re-assess if your current setup still meets your needs or if a different server stack might be more suitable. You can safely try these changes without impacting your live sites.

Once you’re happy with the new setup, you can switch your DNS over with minimal downtime.

I’ve covered the various tasks that should be carried out on your server, but how regular should these tasks be performed? I would recommend that you perform the following once a month, which shouldn’t take more than 30 minutes:

As for upgrading to a new version of Ubuntu, you should definitely beware of the end-of-life date of your version of Ubuntu. At that point there will be no further updates released of any kind including security updates. You should definitely move all your sites to a fresh server and decommission an old server before that date. We typically provision a fresh server roughly every two years, generally after a new LTS release.

That’s all for this chapter. In the next chapter you will be able to snag a complete set of Nginx configuration files optimized for WordPress that we’ve been building throughout this guide.

Did you enjoy this chapter?

In this final chapter, we offer a complete Nginx configuration optimized for WordPress sites. Not only does it amalgamate all the information from the previous chapters, but we also draw upon the best practices from our experience over the years.